AX32 on Red Hot Conversion Duties in The French Riviera 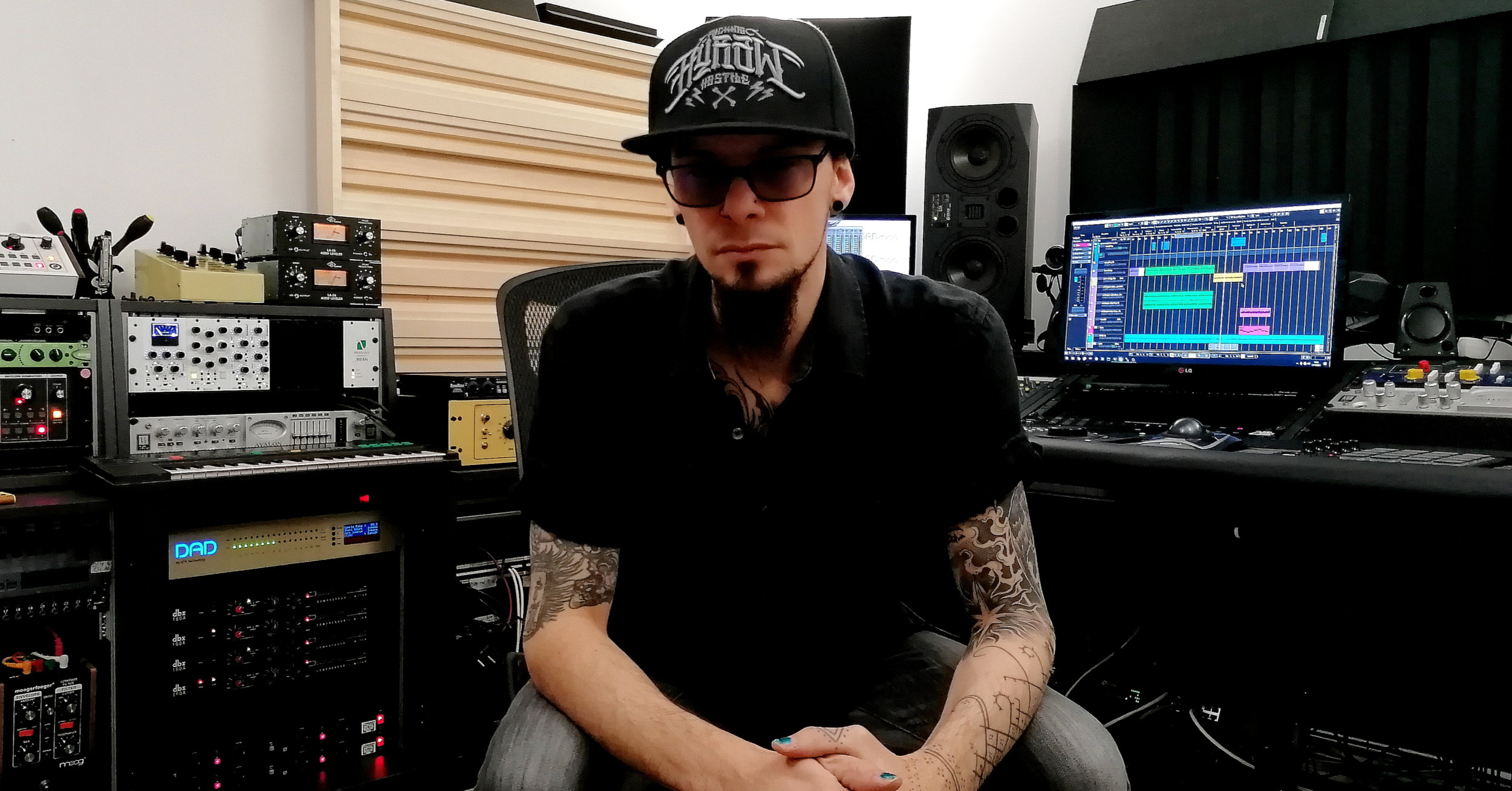 AX32 on Red Hot Conversion Duties in The French Riviera

Our AX32 has been - and still is - hugely popular among classical music location recording engineers due to its sheer audio quality in converting analog to digital, as well in terms of clean and transparent mic preamps on the analog inputs. But as it turns out, it is not only in classical music circles that pristine audio quality is being appreciated.

We found a hard-rocking gentleman in France, who initially bought into the world of AX32 and DADman for its flexible audio routing capabilities, but he also had quite a moment of revelation once he heard the difference in audio quality when the system was installed... 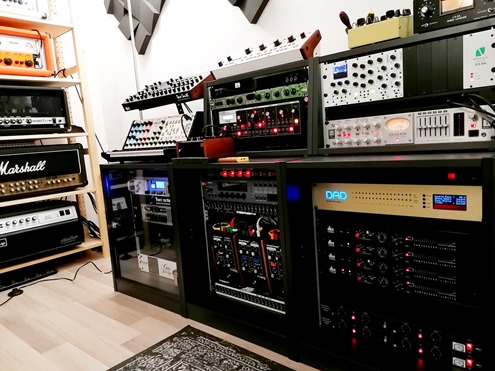 In La Seyne-sur-Mer a tad south of Marseille and Cannes on the French riviera, musician, producer and audio engineer Cyril Colombo AKA Cnx Apocalyps runs his Temple Studio where he has specialized in executing a very particular set of skills. In short, he has made reamping guitar and bass tracks his trademark.

Obviously, Cyril also offers traditional recording and mixing sessions, as well as remixing, but reamping is one of the niches we would like to zoom in on in this article – recording and creating for sample-based instruments is another.

At the center of Temple Studio, Cyril has installed an AX32 with two Analog Input cards for 16 channels in, as well as an Analog Output card, which gives him 8 pristine output channels. He has also added the 64-channel Dante expansion module and utilizes the MADI and AES ports as well.

“Before I installed the AX32, my studio was a complex setup with a number of different AD-converters and DA-converters at various places in the signal chains, as well as a digital master clock,” Cyril explains. 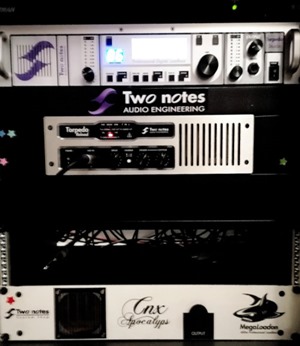 “I was able to replace all of this with the AX32, which became the central piece of gear in the studio. It was a huge change! Now, everything is perfectly clocked and patched on the same unit. It's a time saver and the AX32 is the kind of unit you can trust without overthinking it all: Set, forget and let's go.

I no longer fear losing the digital clock, or clipping the input stage of the converters thanks to the 30dbu headroom. Oh, and the sound is just fantastic!”

Cyril’s system runs at 88.2 kHz, where the AX32 is the main digital clock for the entire system, including gear connected via AES, Dante and MADI. Ultimately, it acts as a digital patchbay and the AD/DA-converter that feeds the monitors.

On the AES port of the AX32, a Two Notes Torpedo Studio cabinet simulator is connected, which allows Cyril to listen to different speaker configurations without latency during tracking.

Cyril is a true gear head when it comes to delicious guitar heads and cabinets. In Temple Studio’s line up of guitar flavours, you will find no less than 12 guitar and bass amps – many of them in the ‘Vintage & Rare’ category: 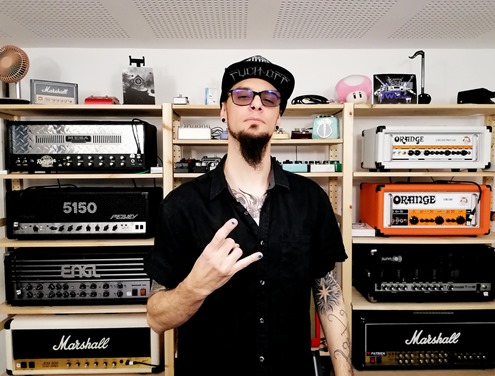 Add to that, a vintage ‘silverface’ Fender Bassman, which should join the collection soon, as well as plans for adding more modern heads such as the Revv Generator MK3. 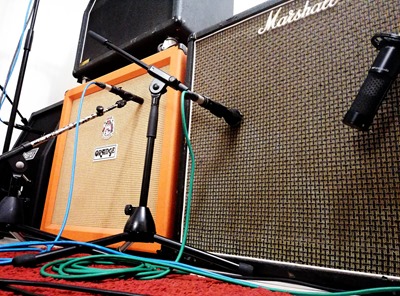 On the cabinet side of things, Cyril has:

Further, Cyril is on the outlook for a nice greenback cab to complete the picture and broaden the sonic flavours of the studio even more.

Now, those are all physical amps and cabs, but Cyril is also very fond of the cabinet and amplifier simulations from Two Notes Engineering: “I have the Two Notes Torpedo Reload as my main reamp box / DI and attenuator with the cabs, and I use their Torpedo Studio and the CabM+ for tracking, reamping and mixing.

I also have an ultra-limited custom 400W loadbox for the Ampeg SVT head called Megaloadon, which was originally designed for the Swedish band Meshuggah.”

To keep the reamping process quick and reliable, all heads, cabs and Torpedos are connected to a custom amp switcher made specifically for Cyril's needs by a French company called DESS. This way, he can switch from any one amp to any other amp on the fly without having to swap cables:

"Everything is set and ready to go at any time. You could say that the DESS is my analog amp patchbay in the same way DADman is my digital audio routing patchbay. Both are huge time savers."

To wrap up the reamping area, Cyril also uses boutique pedals and analog outboard gear such as the BAE 1073 for even more choices and sonic nuances.

An Unforeseen Yet Fortunate Bump in Audio Quality 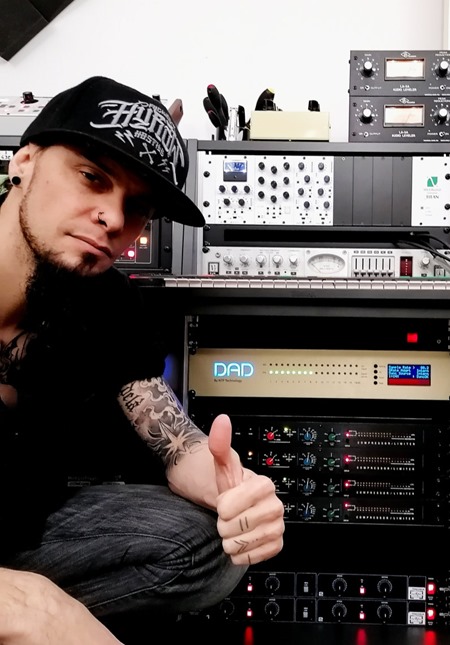 The main reason for Cyril’s decision to get an AX32 was actually first and foremost taken with a view to audio infrastructure purposes, but a dramatic bump up in sheer audio quality was a most welcome surprise:

“At the beginning, I chose the AX32 because of the modular design, which allowed me to have Dante, MADI, AES and Analog within a single unit.

But I couldn’t imagine the audio quality gap between AX32 and my former set up. The first session I did with the AX32 just blew my mind!

The transparency and the high grade of AD and DA conversion, the stability of the clock, the low latency... I couldn’t believe it. Needless to say, it was a huge step for me.

You know, due to the reamp process, I use more AD/DA conversion cycles than most studios, but I never worry about that because with the AX32 handling that the signal remains so full and rich. It’s a whole new world!”

Another round of AD/DA conversion cycle is for mixing with analog outboard gear, which is also a preferred choice at Temple Studio.

Cyril started out working with analog tools and still loves the sound of them, and among his favorites, we find names such as Wes Audio and BAE’s remake of the classic Neve 1073 mic pre and EQ.

Making the transition to the AX32 and the DADman control software opened a flexible system that was not only quick and easy to set up, but also allowed for adding new configurations in the future – for example immersive audio. 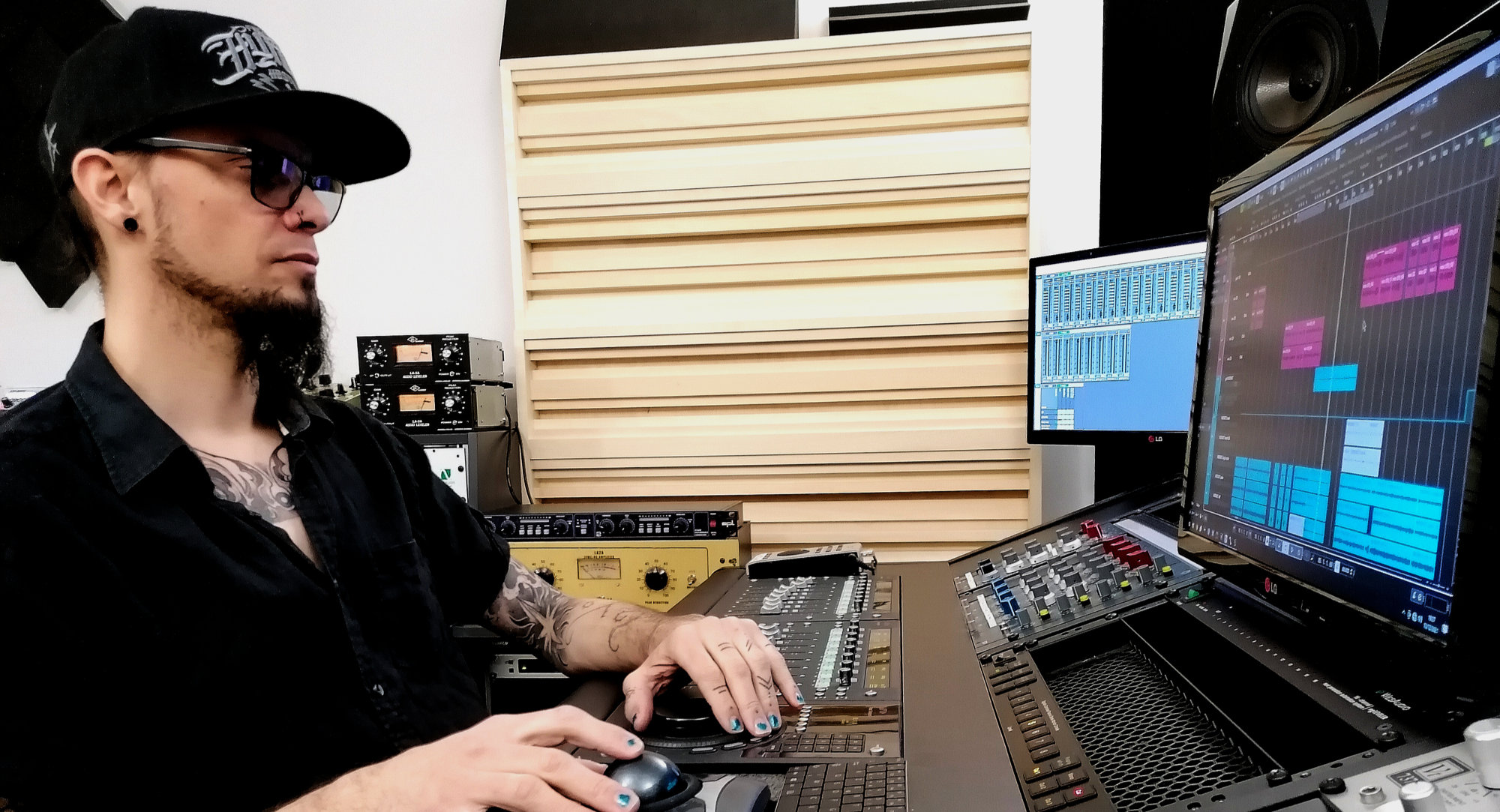 “When you have already used the Dante Controller it’s not a big deal. My setup uses Dante, MADI, AES and Analog. Further, I have two computers connected, and it took me just few hours to set everything up. One computer runs the DAW and then I have a laptop connected via Dante for running external reverb plugins and the artist headphone system in the tracking room. Now, everything is laid out in a clear way and all channels are available on the fly via the flexible DADman routing matrix. 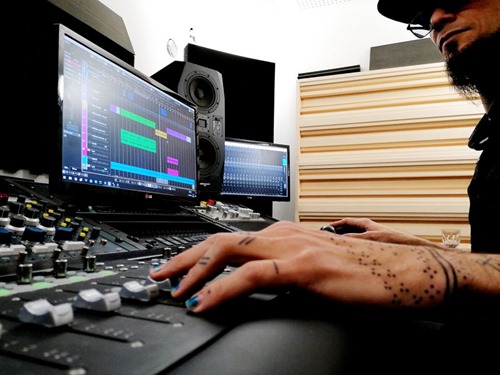 At the moment, I run a traditional stereo setup with an added sub – a 2.1 monitoring system – with Adam S3-A speakers. That said, some of the theatre companies I work with now begin to experiment with doing Virtual Reality shows that is mixed in Dolby Atmos immersive audio.

So, at some point I will be looking at upgrading my studio to run immersive audio formats as well. Actually, I recently made a move from Steinberg’s Cubase to their Nuendo DAW to be ready for immersive productions on the software side, and with AX32 and DADman, I know that I can easily make the transition when I am ready to pull the trigger.

Finally, I’d like to mention that the ability to save and recall complex routing setups for different tasks and applications in the DADman is a true time saver!

For instance, I have my go to file for tracking a percussion set for Afro House tracks, another one for metal and rock drums, another file for reamping bass and guitars, and a last one for classic analog mixing. It’s simply a rock-solid and reliable way to organize my routine – and it saves me a ton of valuable production time in the studio.”

Pro Audio Is A Wide Palette of Applications and Opportunities 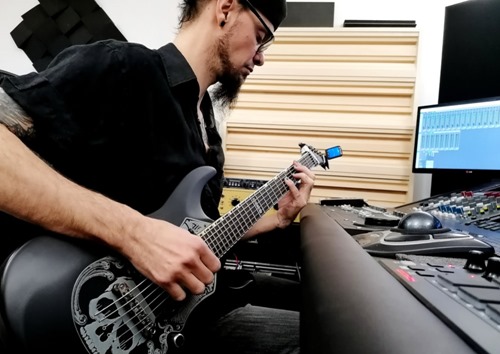 Cyril does not limit himself to working with just one part of the overall audio production chain. He does traditional studio work with recording artists and reamping, but he also takes on work as a FOH engineer on concert tours or theatres, and he works with pro audio brands.

As Cyril mentioned he is a fan of the Two Notes Engineering products and acts as a kind of evangelist for them, but he also works in an even more direct way with a company called Kiviak Instruments that are developing what may appear as a classic hardware sampler, but packed with modern technology such as cloud libraries and machine learning.

For Kiviak Instruments, Cyril creates sound banks for the cloud library, which includes a bunch of his gear – including the AX32 of course: “The punch and clarity of the DAD converters are just perfect for that job.”

Having such a broad audio profile, we asked him to share a tip from any one of the areas he works with, and here he actually chose the more traditional cap being a producer and tracking/mixing engineer working with artists. 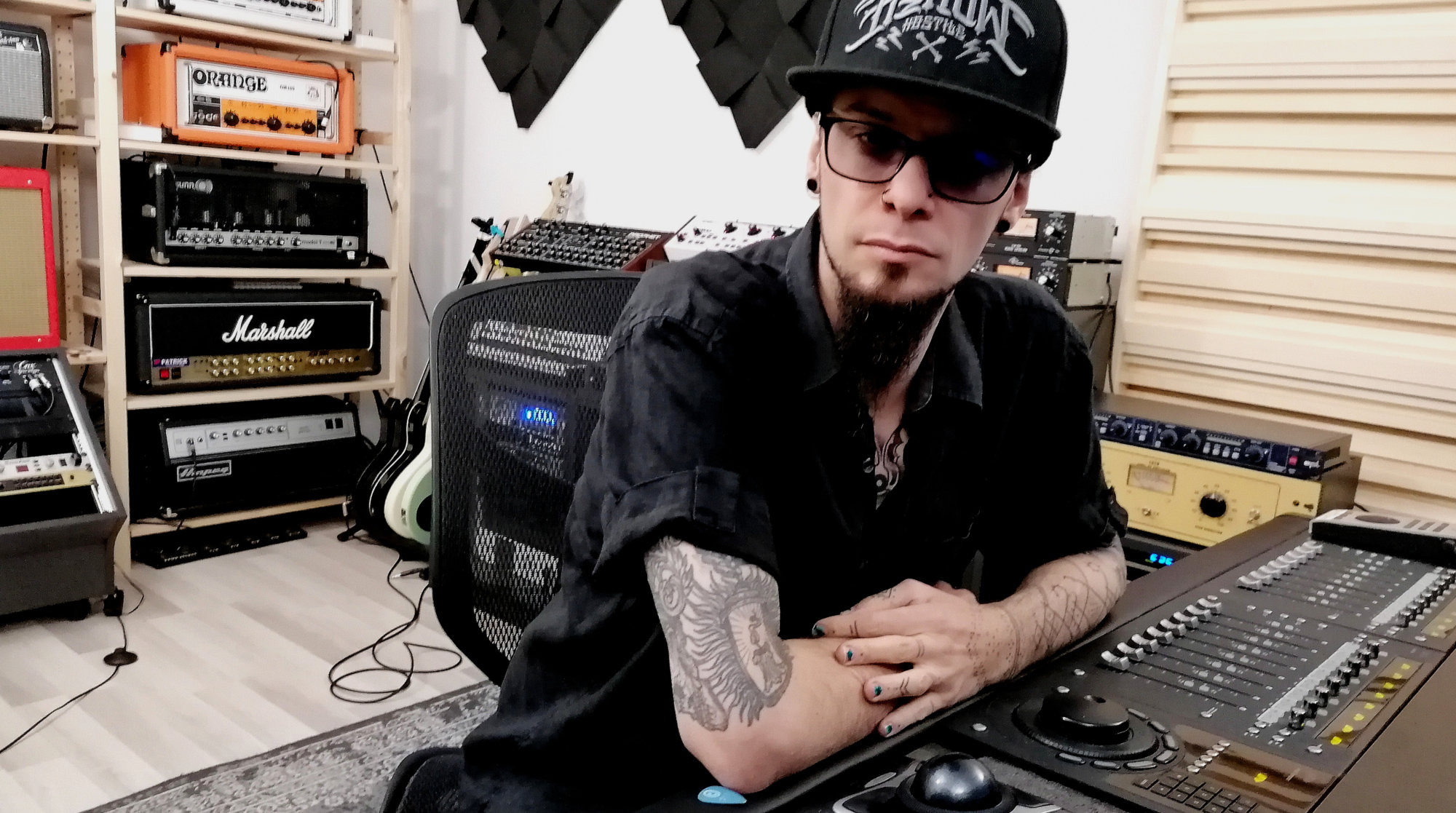 “I always strive for keeping a wide perspective and ‘zoom out’ as much as possible during pre-production and production. What does that song need? What’s the story!?

So, I try to find a good direction and follow that line until the end. I always discuss with the bands about the process, emphasizing the feeling and the importance of coherent choices, because in most cases the artists are more focused on the sound than the context. And both sides are hugely important in my view. That would be my tip. Zoom out and have the overall story in mind when you zoom back in again.”

Wow! That is actually a very cool tip, and with that in mind, it’s time for us to zoom out and zone out. Huge thanks to Cyril for taking the time to talk with us, and always keep the French Riviera Rocking!