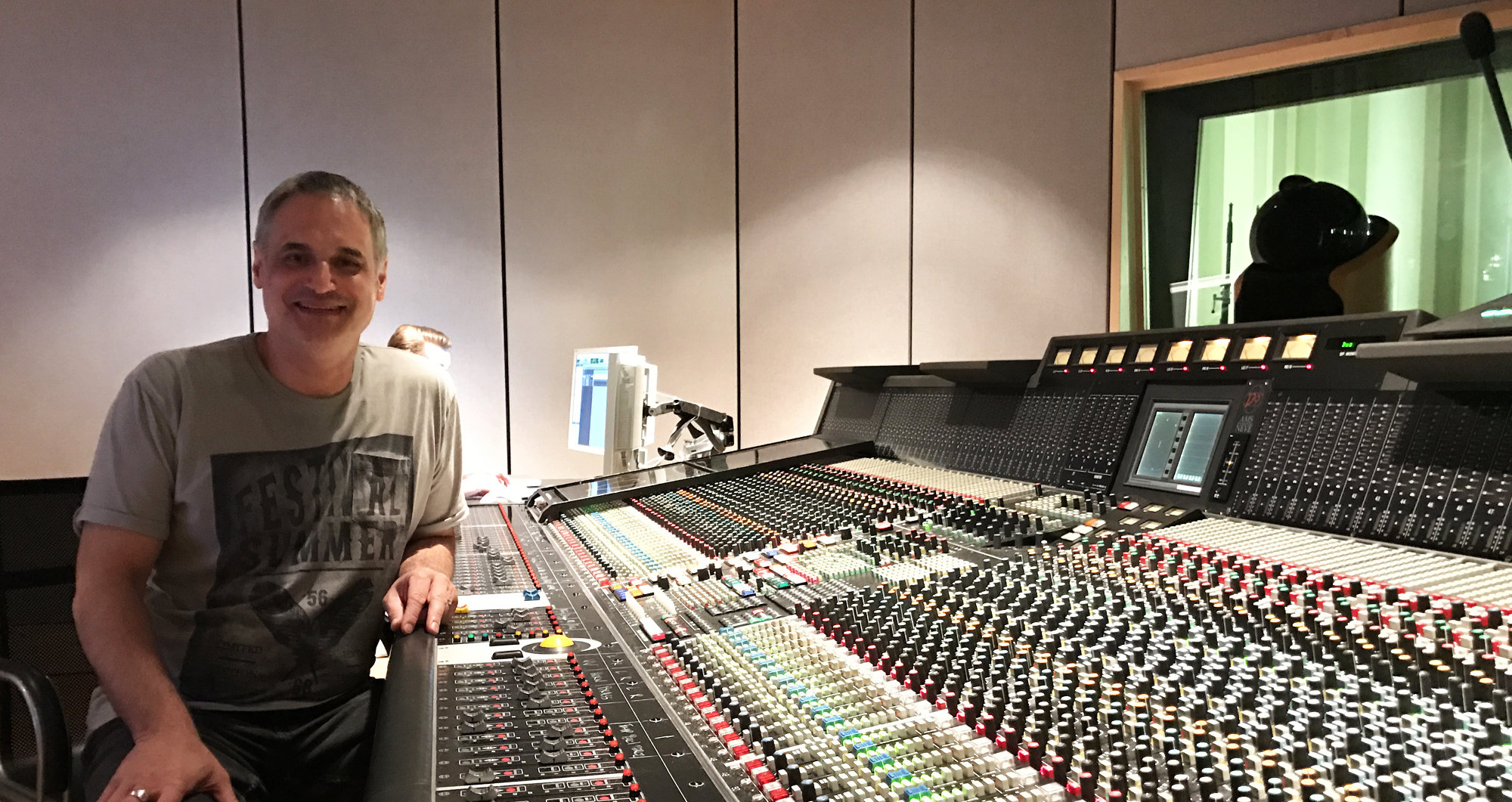 Studio Babelsberg and its impressive scoring stage just outside of Berlin, Germany, is home to ’Deutsches Filmorchester Babelsberg’ – a full symphony orchestra that deliver music for film and TV productions not only within Germany, but also globally...

The German Film Orchestra and its dedicated studio and scoring stage is by any pro audio measure a major facility, yet it is only part of the overall Studio Babelsberg that is also one of Europe’s largest film studios. We were fortunate to be invited to visit this amazing facility for a chat and a tour around the German Film Orchestra’s studios, scoring stage and ‘machine park’, hosted and guided by Head Studio Engineer, Falko Duczmal. 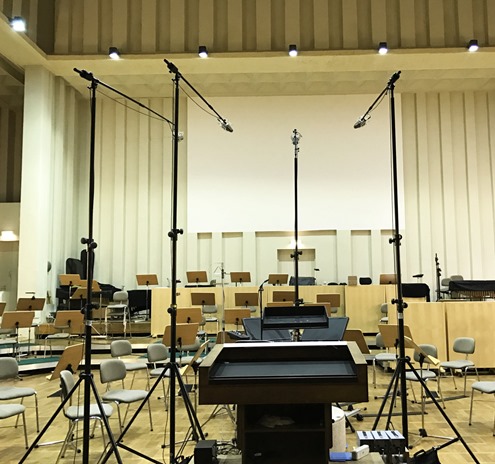 The first ‘room’ we enter is actually the massive scoring stage / recording hall that takes up 350m2, has 11m to the ceiling and is methodically treated and perfected in terms of room acoustics.

The regular habitants of this grand hall are the orchestra members that count 50 musicians all of which are full-time employees. However, if a certain recording needs even more musicians, additional and highly professional freelancers are hired.

On the film credit list, you will find titles such as Sleepless, Hitman – Agent47, Walking with Dinosaurs, Anonymous, Ninja Assassin and The Musketeers, and for additional orchestra parts for commercial album releases, clients include: Rammstein, Bryan Adams, Celine Dion, Terrence Blanchard, Sting and many others.

One of the challenges that may occur when working with orchestral music is the issue of the grand piano tuning in a classical music setting. Normally, the instruments are tuned in standard pitch A=440Hz, but in Germany grand pianos are tuned to play this note at 443Hz and therefore it is normal for symphonic orchestras in Germany to play in 443Hz altogether.

And these 3Hz definitely makes a significant difference if you try to add the orchestra to other tracks already recorded in 440Hz. But as Falko Duczmal explains to us, they have found a way to compensate for this by using the Vari-Speed option in Avid’s Sync HD. They are actually changing the pitch in real-time during recording. We will come back to the technical details of the setup in a bit.

Golden Goals Behind the Stage 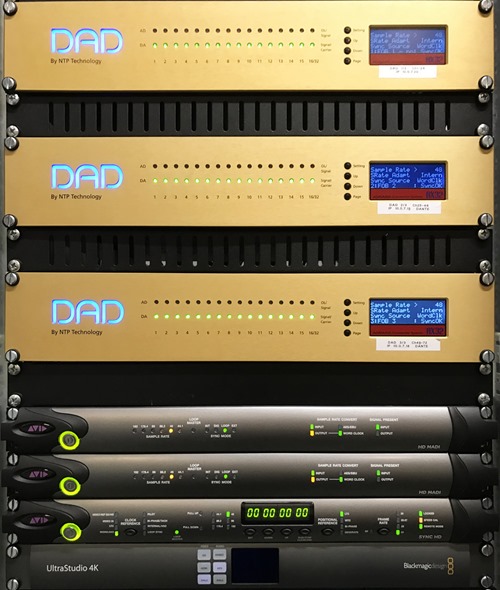 Backstage, we find the machine room, including a rack that serves as home to the Studio’s Pro Tools HDX system and 3 of our AX32 AD/DA converters; each of which is equipped with 24 inputs and outputs. Florian Strucken of AVS-Medientechnik GmbH worked with Studio Babelsberg as a technical consultant and integrator on designing and installing the project.

The two control rooms of the Scoring Stage are connected digitally and on either side of the workflow within the digital domain, the AX32 units are guarding the digital gateways, making sure that both the AD and DA conversion is absolutely flawless. In the main control room – the one with a view to the recording hall – there is an amazing 72-fader analog NEVE VXS console, and in the second control room, you will find a similarly impressive SSL C200 digital console.

Installing the AX32 units were indeed an upgrade, according to Falko Duczmal: “The sound we get now is much more detailed and transparent. There is a certain depth to it and the sound we hear in the recording hall is just translated extremely accurately to the digital domain.”

That, however, is only part of the story behind the German Film Orchestra studio setup. As mentioned in the above, there is a need for using Vari-Speed, which is easy to apply in Pro Tools after a recording session, but if you need to change the pitch, but not the speed, in real time, the only solution available is Avid’s Sync HD. Therefore, the 72 analog outputs from the tracking desk – the Neve – are converted to digital by the AX32 units and then passed on to two 64-channel Avid MADI interfaces that are the direct link into Pro Tools. 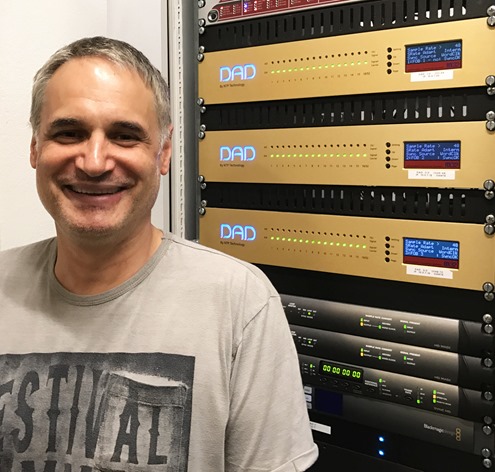 Falko Duczmal shares with us that setting the Vari-Speed to +0.12 cents compensates for the 3Hz, as 1Hz equals approximately 0.04 cents, and that the solution works out absolutely perfectly.

While Falko Duczmal and his staff are beginning to move towards ‘mixing in the box’, they still frequently use the option to route the channels via the AX32s to the SSL console in the second control room for further mixing.

Whenever sound is being captured, microphones are a major topic. And the Scoring Stage Babelsberg is no exception in that regard. Apart from the obligatory Decca Tree setup, they also use additional room mics, as well as spot mics on every instrument or desk. And they have a soft spot for Neumann mics. 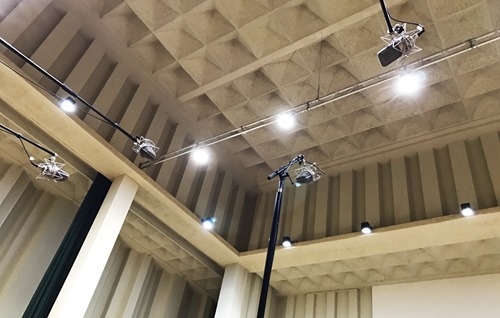 And as if that wasn’t enough, there are also 42 additional microphones from AKG, Audio-Technica, Beyerdynamic, Brauner, Brüel & Kjær, Coles, Electro-Voice, Sennheiser, Shure and Schoeps. As Falko Duczmal puts it:

“We have all the microphones that we need, but it’s always good to have more options to choose from, so we’re constantly searching for new ones as well that may have a different flavor. 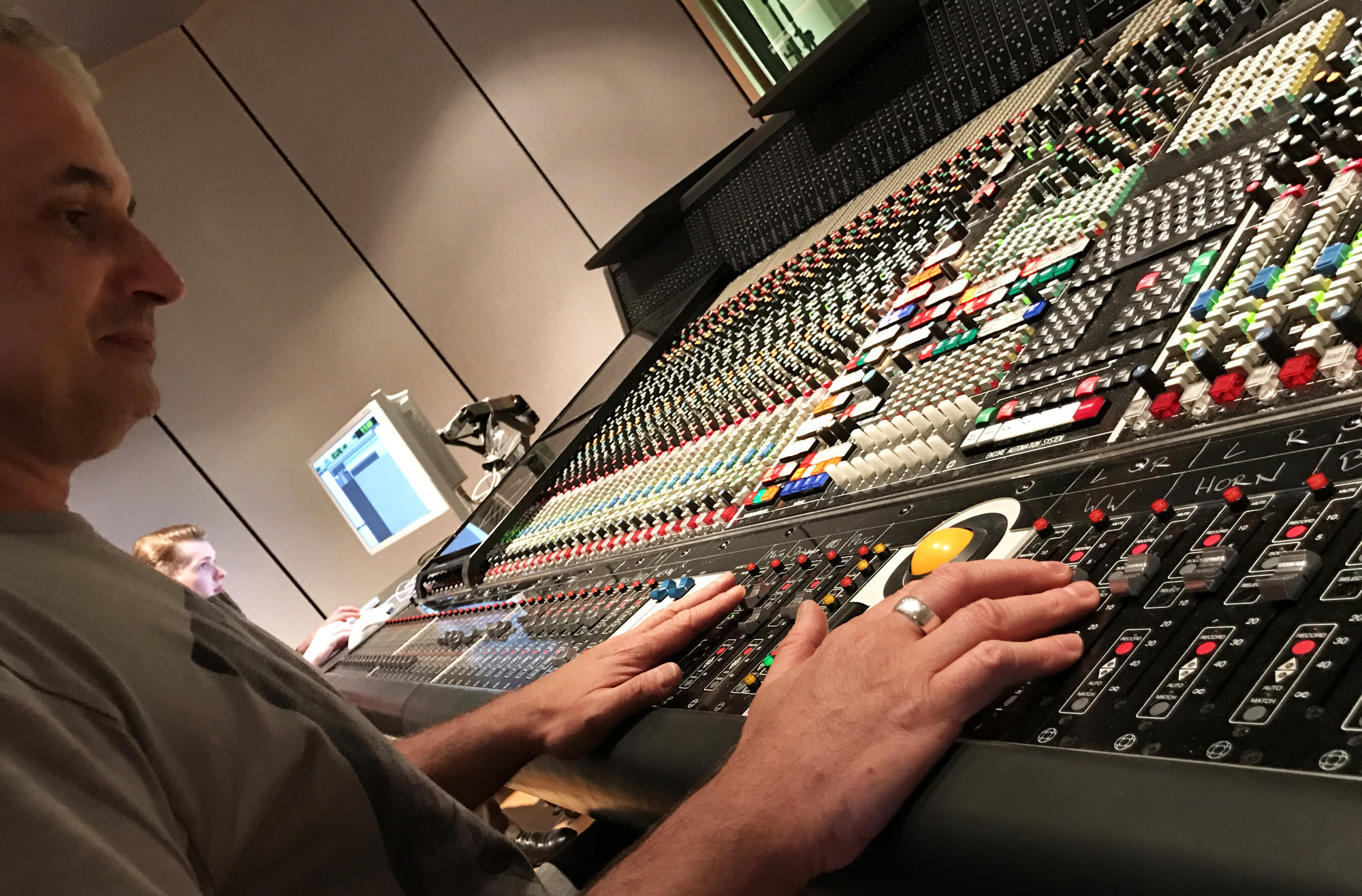 The German Film Orchestra is a full symphony orchestra and while they also do play live concerts regularly in the same way as other symphonies, they do work a little differently in the studio. This is of course due to the nature of being specialized in film production where the orchestra needs to be synchronized perfectly to the visual side of things. 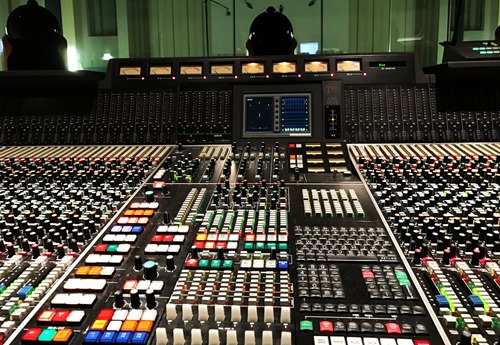 "The main difference between recording our orchestra and other symphonic orchestras is that we almost always record to a click track to stay in sync with the picture. Sometimes, there may also be another pre-recorded track that we add overdubs to, and in those cases, we would typically receive Pro Tools session files in advance and then we set up our system accordingly and can record to the same set of bars and beats. And everyone has the click track in their headphones – all of the musicians as well as the conductor. In rare occasions, there is room for more freedom in terms of timing and sync, and then only the conductor will have the click track in the headphones.

With every musician wearing headphones – due to the click track – we were also wondering about how the headphones mixes are approached. “We divide the headphone sub-mixes into groups: strings, woodwind and brass together, percussion, piano and then a separate one for the conductor. If it is an orchestra-only recording, most of the musicians prefer to have just the click track and not get any musical information in the headphones, but rather having it come from the acoustic sound in the hall. But if there is a track with for example drums and bass underneath, then many of them prefer to also have that in their headphones while adding the orchestral parts.” 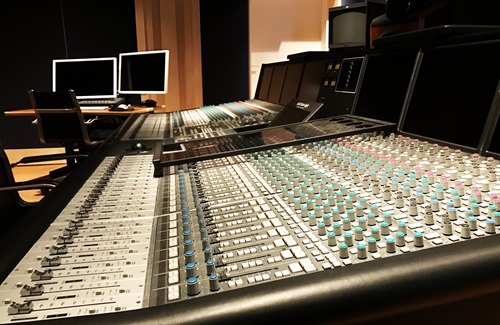 Working to picture also changes the way of a recording session in terms of fragmentation. Rather than recording large sections or movements at a time, a film score is often compiled from lots of small bits and pieces that could be as short as 20-30 seconds. Therefore, we asked Falko how long a typical score for a feature film would take to deliver.

“Well, considering that there are many short fragments that might need a handful of takes to be perfect, I’d say that on average – and depending on the complexity of the project – we could record anywhere from 20-40 minutes of material in a day. And the typical 90-minute film would have about 60 minutes of music – in some cases this would all be orchestral and in others it may be a mix between orchestra and for instance electronic music.

But once you have, say, 1 hour of orchestral music recorded, the post-editing will typically add 2-3 days to the projects and the same goes for the mixing phase. So, for a ‘typical’ film project we would be able to deliver the orchestral pieces – including recording setup and preparation, recording, editing and mix for stereo as well as 5.1 surround – within 1-2 weeks.” 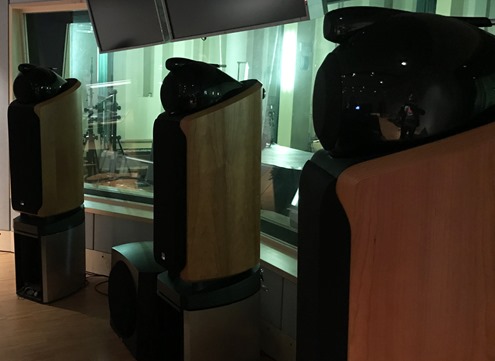 Then, of course, there is a whole other stage of production where the music is mixed with the dialog and effects tracks, but that will happen at another facility and is a whole other side of the story. However, the sound postproduction is by no means disconnected as it is of course part of an overall production in which collaboration is always key.

“Before we start recording, we talk to the composer and the post mixing engineer to find out how they would prefer the delivery in terms of a full mix or individual stems. You see, in most cases, the orchestra will sound best when playing ‘tutti’ – or all at once – but from a mixing perspective, it may be more important to be able to control each section of the orchestra completely separately. If that is what they prefer, we will record e.g. strings first, then add brass and woodwind, etc.

Normally, we prefer tutti recordings, but it can also be a mix. For example, we could record the orchestra tutti, but if there is a solo feature such as violin or glockenspiel, we might record that separately so the mixing engineer can have full control not only in terms of volume, but also panning.”

There is no doubt that the German Film Orchestra at Studio Babelsberg is running an extremely tight operation – a well-oiled music-delivering machine that is capable of delivering top-shelf results for any type of film score or music CD production. It was truly a pleasure visiting and experiencing first-hand how our converters are being put good use out there in real-world, high-end applications, ensuring that the sound you will hear on films blessed with this orchestra’s touch will sound absolutely stunning both in terms of sound quality and sheer musicality. 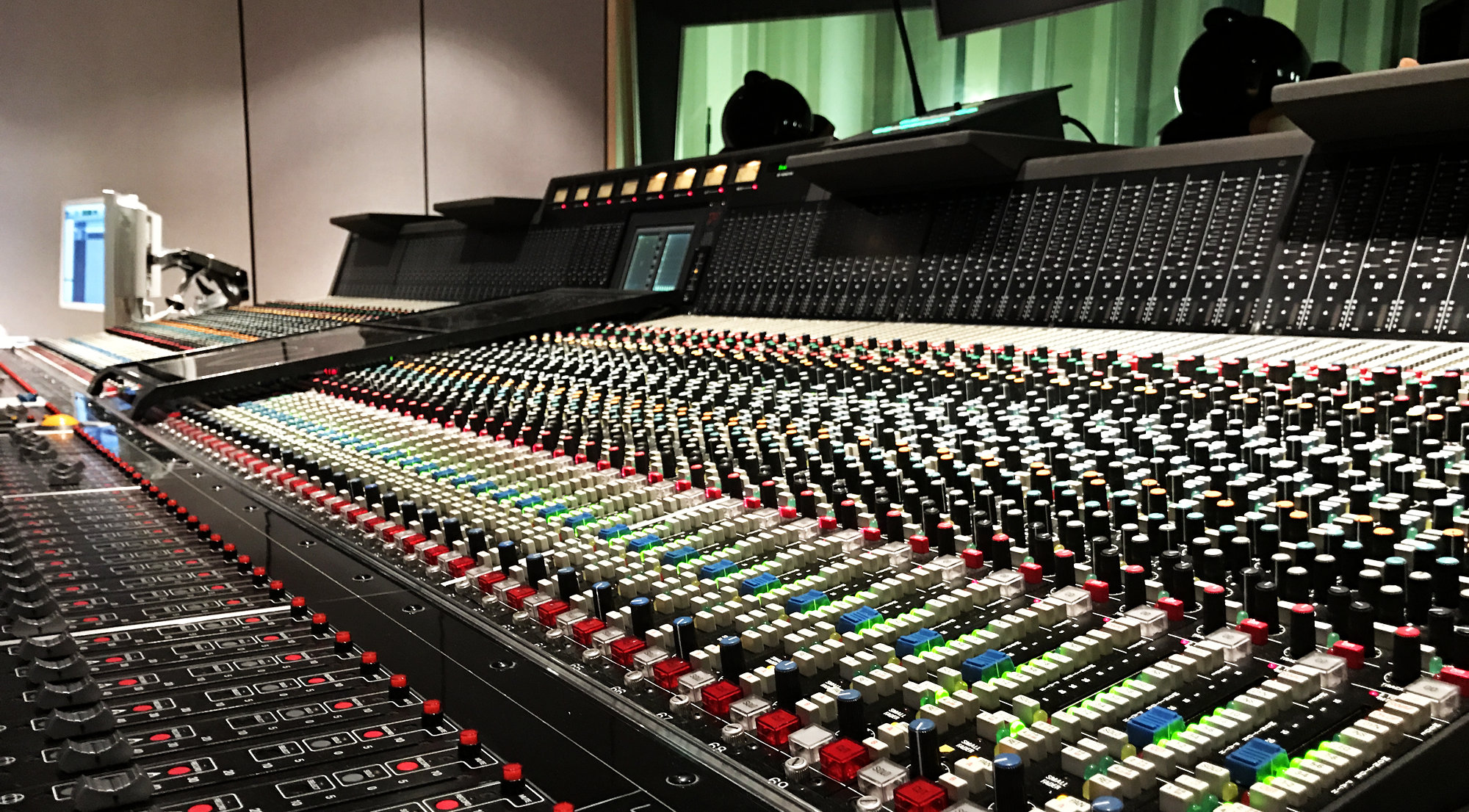