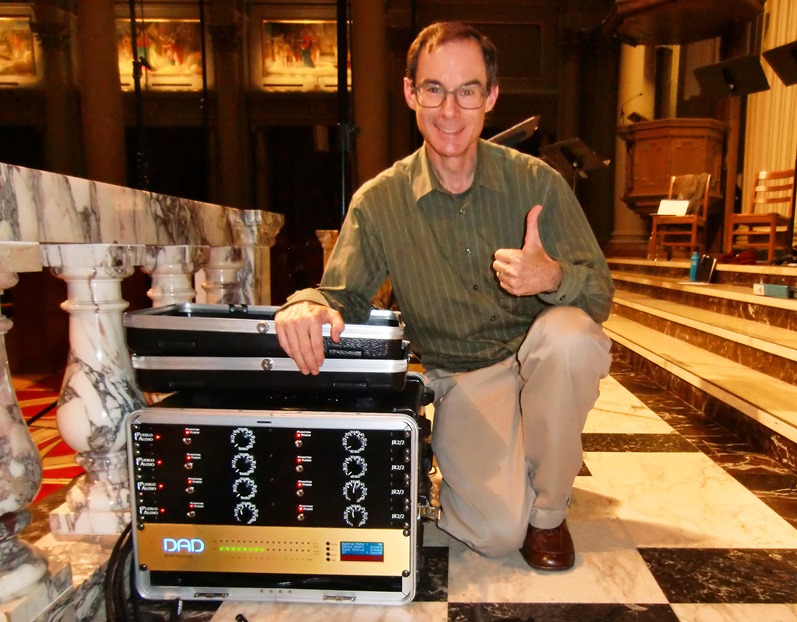 A pristine AD and DA converter with superb sonic quality, versatile I/O structure and Dante IP Audio, the AX32 follows the success of the company’s AX24 with enhanced sonic conversion performance, up to 48 analog audio channels, and a flexible digital signal interface, routing and distribution structure.

“I used the AX24 two years ago,” remarked David Bowles. “While I felt it was an excellent unit, it only had eight channels. Since that time, not only has DAD expanded the channel count but, also very importantly, they have introduced an IP interface, which is primarily what I'll be using in my workflow.”

DAD’s new AX32 AD/DA converter and digital router interface is the ideal choice as a front-end or digital format converter for recording or mastering applications where up to 48 channels of analog inputs or outputs are needed. The AX32 provides a variety of digital interfaces such as ProTools HD, MADI, AES and Dante IP audio. A microphone pre-amp option is also available.

“Using the Dante technology for audio over IP,” explains Bowles. “Means that with a simple network switch, a whole raft of signals can be routed to two or more different devices simultaneously. As it is, right out of the box, the AX32 has a number of interfaces -- not only the IP, but also MADI, AES and ProTools. This allows me, without any sort of splitter, to make two completely redundant recordings of the same audio signal.”

“Now with both the optical MADI and the IP interfaces,” Bowles continues, “I can place the units right next to the microphones, so there are very short cables needed. As everyone knows, analog signal degrades with increasing lengths of cable.”

Bowles recounts a recent project: “When I tried out the DAD AX32 in June, I was working on two live recordings. I set them up as stereo, with only two microphones. My outboard mic pre has split outputs: I was able to route two outputs through my current setup, then two outputs through the DAD. I recorded these at 192 kHz and then compared them at home. I then brought one of my clients in and just gave him an A/B comparison. We both picked the AX32. It was simply clearer. The imaging was a lot better, and I felt that the previous A to D converter I used was very good, but now sounded coarse in comparison.”

To better evaluate the new DAD AX32, Bowles has been going back through his recent archives: “I've been listening to a lot of my projects, simply using the D to A conversion of the AX32. Again, there are just so many improvements and I'm able to apply some very subtle changes in mixing and processing, and hear the results immediately. Now, because the AX32 is something I can take on the road, I can have the same setup at home as on location -- both for recording and for monitoring.”

As an option with the DAD AX32, the Dante IP interface allows third party Dante-enabled equipment from more than 140 manufacturers to interface to the AX32 via Ethernet. Audinate’s Dante Controller is a free software application that enables users to route audio and configure devices on a Dante network. With automatic device discovery, one-click signal routing and user-editable device and channel labels, setting up a Dante network is simple and straightforward.

“Combining the Dante IP interface in the AX32 with Audinate’s Dante Virtual Soundcard means that the unit has a wide variety of applications for recording, and also for editing and mastering. I have tried the Virtual Soundcard on three different editing workstations, where it worked flawlessly and after I get back from my next location recording trip I'm going to try it on a fourth one.”